May 27, 2009
I love going out to breakfast. In fact, it's my favorite meal of the day to eat out. There's just something about having that first meal of the day cooked for me that sets a mellow tone for the rest of the day. That's probably because weekends are when I tend to go out for breakfast and I like my weekends mellow when I can get them that way. 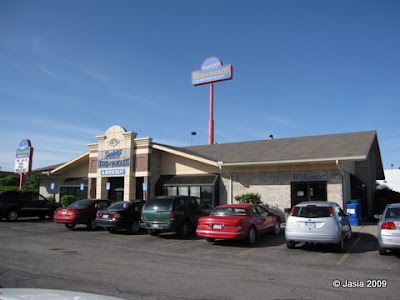 Sophia's House of Pancakes is rather unassuming sitting as it does in a largely abandoned strip mall parking lot in Benton Harbor. It once was a Big Boy restaurant, the evidence is there in the rest rooms. But as soon as you enter and are greeted by not one but two gentlemen in suits/sport coats you know you're at an establishment that has a higher standard.

When D and I read on the menu that the omelets were made with 5 eggs and came with a side of 2 pancakes plus hash browns we immediately decided to share an order. Who could eat that much? (OK, Jo can ;-) We settled on a ham and cheese omelet and had a delicious cup of coffee while we waited. I have to say, the wait staff are as friendly as they come and very attentive.

The food arrived in short order and just look at this! 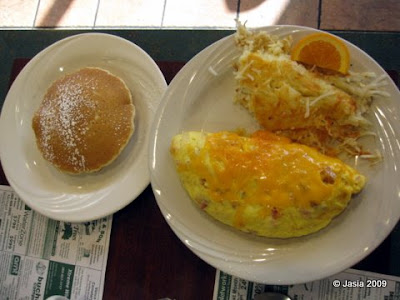 It tastes even better than it looks! The omelet was light and fluffy. The hash browns were very tasty and crispy-tender. The pancakes, well, let's just say there's a reason Sophia's is The house of pancakes. Absolutely delicious!

We've returned for this same dish at this restaurant several times and have brought the kids along too. We're always delighted with our meals no matter what's ordered. We'll be back again and again, that's for sure.

I heartily recommend Sophia's for breakfast. Don't miss it on your trip to Benton Harbor!
Benton Harbor Restaurants