February 01, 2010
Here it is February 1st. As of today, we are basically 2/3 of the way through the winter season. This is the first winter I've experienced in St. Joseph and it has been interesting. December was pretty much what I'd expected, maybe a little less snow. But January more than made up for it.

D and I experienced our first lake effect snow storm on New Year's Day. We'd heard the warnings for days in advance but we weren't all that concerned. We had plenty of food on hand and we were planning to stay in St Joe until January 3rd anyway. We figured we'd be able to get out by then and we did. But it sure was an interesting 3 days!

We'd been watching the bowl games on TV New Year's Day and from time to time I'd look out the window to see if the forcasted snow had started yet. C and R had come over to stay with us for a couple days and were planning to head back to Detroit after spending the afternoon at the indoor water park in Watervliet. C called about 4:30pm and said there were white-out conditions at Watervliet. He was concerned about whether he should head home (east on I-94) or head west and come back to the condo. I looked out the window and didn't see any snowflakes at all. It was cloudy but still dry. I didn't know how far inland the lake effect snow fall would reach and I was concerned about it getting dark and making visibility even worse. I told him he should probably come back to the condo and plan to stay the night and head out the next day.

Those who are familiar with lake effect snow in this area would probably cringe at my suggestion. I found out later that the lake effect snow started tapering off just east of Watervliet. But, I also found out the next day that I-94 eastbound was shut down between Watervliet and Hartford due to a 15 car pile up at precisely the time our son would have been driving it had he headed home instead of coming back to the condo. I had no knowledge of the pile up at the time but I sure am glad I gave him the advice I did. It turned out to be good advice this time but generally speaking he would have been better off heading east on I-94 away from the snow storm. I know this now.

By the time C and R got  back to the condo the snow had just started to fall. That was about 5:30pm. We had dinner and watched some more football games on TV and didn't think too much about the weather (we're avid college football fans ;-) . Finally, at 10:30pm, C looked out the window and couldn't believe his eyes. His car was all but buried in snow! In 5 hours time we had received 11 inches of snow! Wow!!! 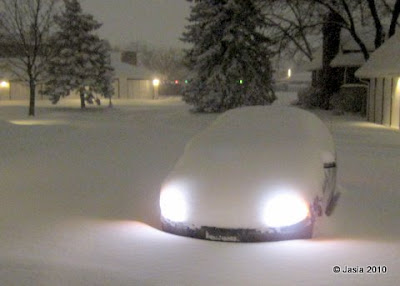 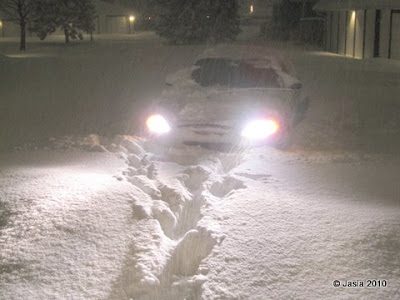 I was born in Michigan and have lived in Michigan all my life, so I've seen my share of snow storms. I've even seen 11 inch snow storms before, but not in 5 hours! Yeesh! It was fun to photograph but I'm sure glad we didn't have to drive in that storm. Here's what our deck looked like... 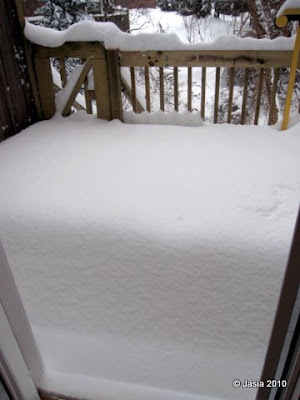 One of the true pleasures of living in a condo is having your snow plowed for you :-) Bright and early the next morning a plow truck was hard at work plowing our parking lot. He got stuck briefly but was back at it again in no time. 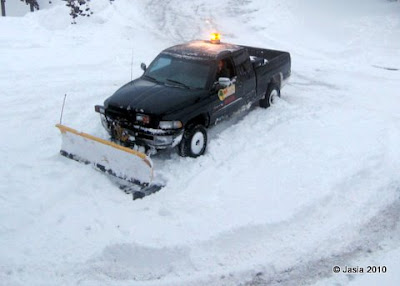 Just about breakfast time the sun came out and the world looked magical. 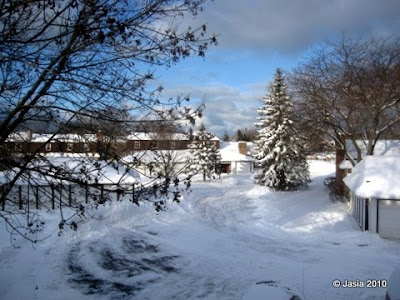 We hopped in the truck and took a drive to see if we could get to I-94 and if it was passible. We did and it was. So we headed back to the condo and woke up C and R and told them to get a move on before it started snowing again (the lake effect snow warning was still in effect and more snow was expected). 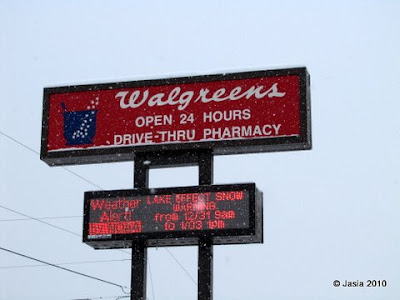 They left in short order. It was slow going until they got past Watervliet but clear sailing the rest of the way home. We had the same experience when we left the next day after 5 more inches of Lake Michigan snow had fallen.

It's official. We've experienced our first lake effect snow storm. My only regret is that I didn't pay better attention to the snow when it was coming down. I would have liked to have seen what a snow fall at that rate looked like. It was awfully dark out though and I'm not sure I would have seen much. Oh well, I'm sure this won't be the last lake effect snow storm we'll see!
News St. Joseph