June 16, 2012
Who likes to eat? raise your hand. Good. I see many raised hands out there! Well, here's a special treat for you, a 4.5 star restaurant review. :-) I'm not a food critic, we all know that. But I like to eat and I like to appreciate the dining experience, whether it's a picnic on a beach or fine dining at an upscale eatery. Today's review is for the later, an upscale eatery. 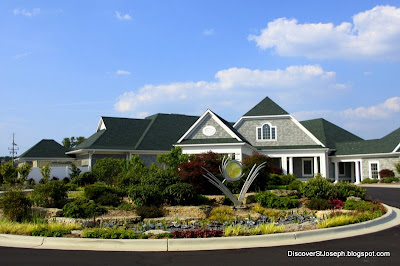 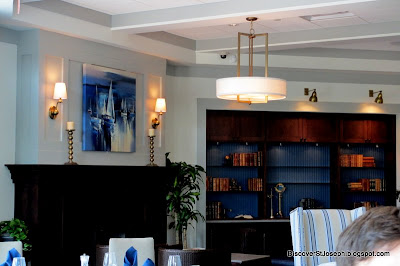 The decor in The Grille is a perfect balance of elegant and casual so that you'd feel comfortable in there dressed in khakis and a polo shirt after a round of golf or in a suit and tie/dress for a special occasion. The colors are fresh and a tad nautical, a nod no doubt to nearby Lake Michigan. The look is a little clubsy with the dark wood book shelves and bar. It conveys a feeling of coziness and tradition. 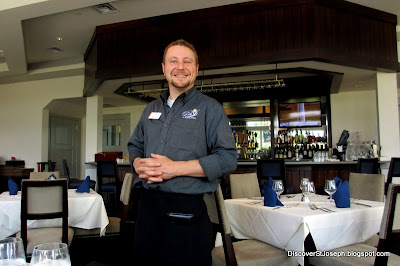 Our waiter, Michael, could be described in two words, charm and grace. He was attentive without being intrusive, confident enough to make suggestions, and he picked up right away on the fact that L and Jo were vegan/vegetarian diners. I know some people cringe at that idea but let's face it, many of us have special dietary needs these days, myself included. It's really appreciated when the wait staff and chef can accommodate that. It's even better when the staff can do it with a smile, as Michael did. 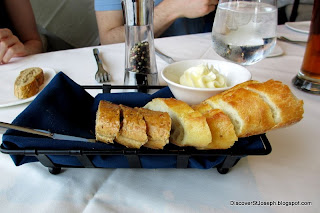 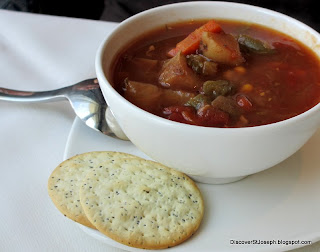 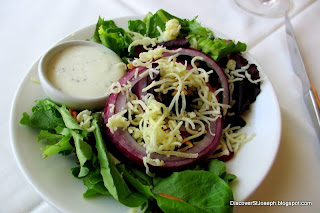 Our meals started out with bread, soups, and salad. The bread was warm, fresh, and tasty. Everybody approved and enjoyed it. D, L, and Jo chose the vegetable soup and were delighted with it. I am ever conscious of my sodium intake so I chose the house salad. And I too was delighted with my choice. The greens were fresh. The dried cherries and almond slivers added a nice balance to the red onion and cheese. I had ranch dressing with mine but there were several other choices. It was a nice change of pace from the usual house salad of lettuce with cucumbers and tomatoes. Thanks to Michael for suggesting it! 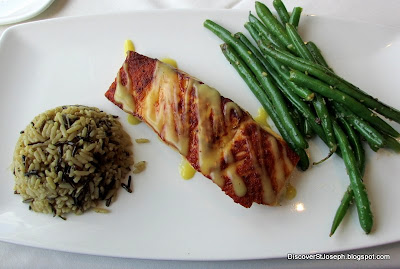 My choice of entree was the pan grilled salmon. As you can see it was served with green beans and rice. This was a wonderfully prepared dish. I specified that I wanted my salmon well done and it was done perfectly... cooked all the way through but not dried or tough. I choose salmon often when I dine out and I must say that this was the best I've ever had. It was melt-in-your-mouth tender on the inside and seared to slightly crispy outside. Perfect. And tasty! The green beans were tender crisp and the rice was flavorful without tasting too salty. Can't ask for or expect better. 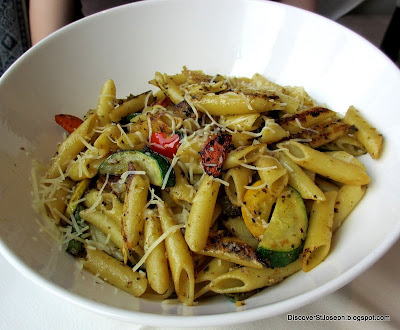 L had the pasta primavera and she loved it. This photo doesn't do justice to how large a portion it was but trust me, it was very generous. L is not exactly a vegetarian but not of fan of meat either. She likes meals that are light and flavorful and this fit the bill very nicely for her. She said she would love to come back to The Grille and she would order the same thing again. 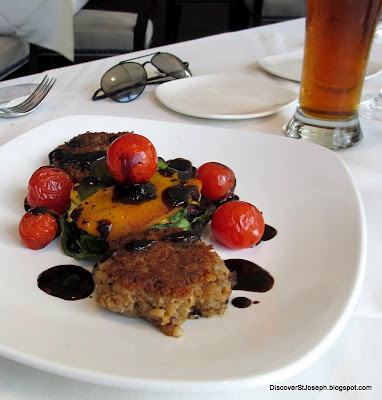 Jo chooses to live the vegan lifestyle so he chose the vegetable ratatouille.He too love his meal. And isn't the presentation colorful and inviting? It can be difficult to dine out when someone in your party is vegan. But it's no hardship at The Grille! Jo said his meal was prepared well, nothing over or under done, with lots of good flavors and textures. He said he would rate The Grille as 5 stars! 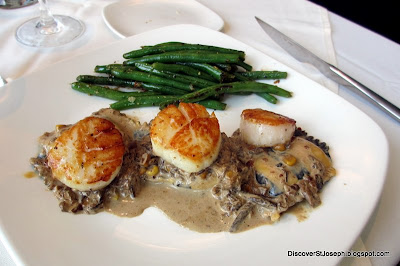 D's selection was the pan seared sea scallops with lobster ravioli. He could not have been more pleased with his choice. The scallops were tender crisp, the lobster ravioli (which I tasted) was heavenly, and the sauce was luscious. I think he grinned all throughout dinner. He said he will definitely be back for more!

I should add that D and Jo enjoyed a glass of the local Livery's pale ale which was on tap at The Grille. They have been fans of that brew for some time and were delighted to see it as a beverage choice. L and I drank water, as usual. 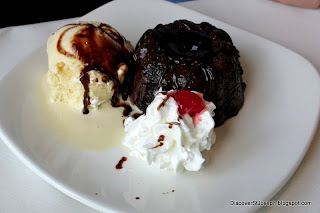 If I could end my review here it would be a 5-star review. But I have to be honest and say that the dessert offerings were disappointing to me. Our family will happily skip over an appetizer before the entree in favor of dessert after it any day of the week. It would have been a fabulous ending to a fabulous meal if only we had enjoyed a dessert on par with the bread, soup, salad, and entrees. That was not the case. We had three options for dessert (2 were chocolate so that's a thumbs up ;-) and they were out of one of them. The one shown above was the molten chocolate cake. It was good but not great. The ice cream was ordinary rather than premium. The cake was moist but ordinary. It wasn't a bad choice, I just wanted to be wowed like I was with the entrees and I wasn't when it came to dessert.

Because dessert is something I so look forward to I would have given my overall experience at The Grille a 4-star rating but since L, Jo, and D all pleaded with me not to criticized them too heavily because of the lackluster dessert I'm going to concede and go with a 4.5 star rating. They are right, it really was a wonderful meal. The folks at The Grille have much to be proud of and diners in the area have much to be pleased with. If you haven't yet eaten at The Grille I would encourage you to. I don't think you will be disappointed.

Oh, and they have a lovely patio for al fresco dining if you're so inclined. We would have enjoyed that I'm sure but it was very hot and windy the day we were there and eating inside seemed like a better choice. 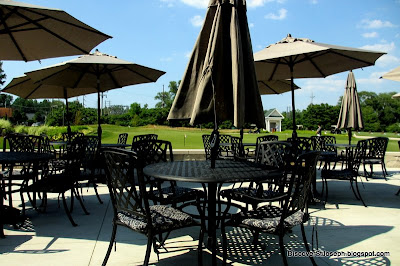 For more information you can visit the The Grille at Harbor Shores web site.

[Disclaimer: No one in our party was compensated for this review.]
Benton Harbor Restaurants