Sunday
The sun was shining when we woke up on Sunday but the weather forecasters were suggesting that the sky would cloud up in a few hours. So we made a bee line for our photo destination of Michigan City, IN bright and early. We've been to Michigan City before but this time we made the trip specifically to photograph the lighthouse. I've seen the lighthouse in several publications and it looks identical to St Joseph's inner lighthouse to me. I'm guessing it was the same designer who is responsible for both. 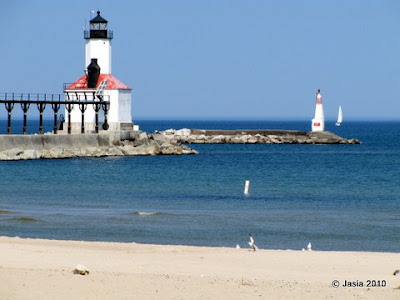 It was sunny when we left St Joe, cloudy most of the drive down to Michigan City, and sunny again when we got there. :-) We had a bit of trouble finding Washington Park. We should have used our GPS, the map we had wasn't detailed enough to get us there from I-94. But we did get there! It took us approximately 35 minutes from St Joe.

Washington Park is a pretty park with lots of grass and trees and places to picnic. The beach is lovely with a nice long stretch of white sand. D and I were surprised to find the beach almost empty when we got there but then we remembered about the time change. Indiana is an hour behind Michigan's EDT. Guess it was a little early for all the Saturday night revelers ;-) 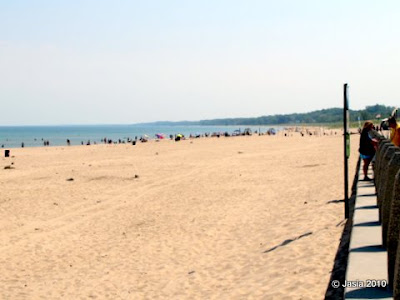 We walked along the pier out to the the lighthouse. Sure enough, it looks just like St Joe's lighthouse up close too. But sadly, it's in need of a paint job. It looks a little sad and neglected to me. 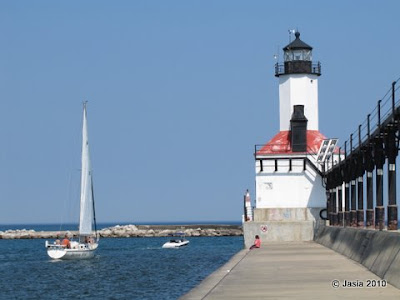 There weren't many boats leaving the marina yet but there were a few. We got a big kick out of this boat named "Breaking Wind"... the name just cracked us up! (D and I find bathroom humor hilarious ;-) 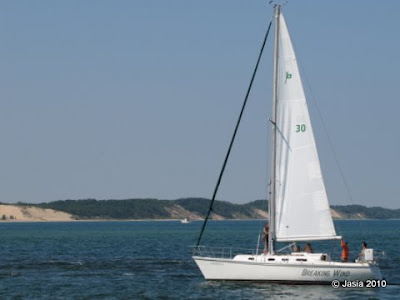 When the temperature started to really heat up we headed back to the car and made our way out of the park. We decided to grab some lunch and then make a quick stop at the outlet mall (is there such a thing as a quick stop at an outlet mall?). We passed this place, Matey's, that looked interesting. 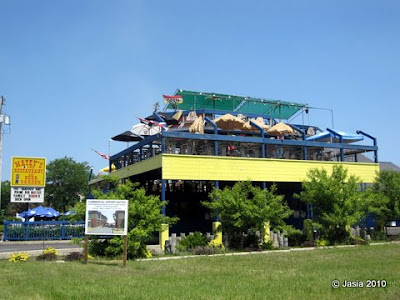 I'll admit I was a bit fearful that it would be just a "hamburger joint" but that was not the case. The inside was tastefully decorated with nautical decor and the food we ordered was yummy! 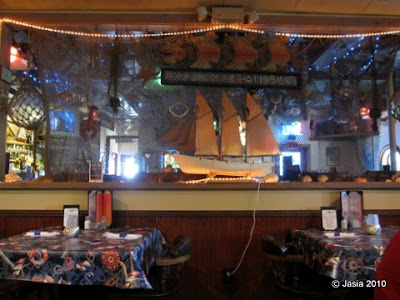 I ordered a chicken salad that had no description on the menu. This is what I got. 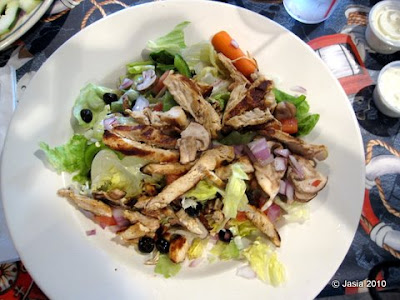 It not only had a good portion of tasty grilled chicken but it also had tomatoes, mushrooms, red onions, black olives, a chili pepper, and cucumbers on a nice bed of fresh lettuce. It was very good!

D ordered the steak sandwich. He really enjoyed his too! 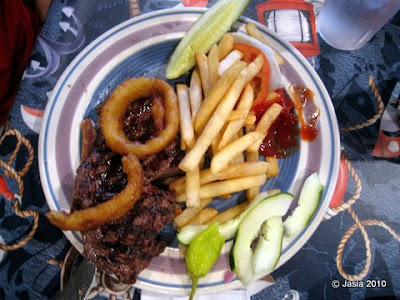 Then it was off to the Lighthouse Outlet Mall. The mall was having a sidewalk sale and the place was packed with people. We were lucky and got a close parking space :-) There were only a handful of stores we wanted to stop in so we really weren't there very long. D and I each bought a watch at the Fossil store (the plastic kind to wear in the pool), I found just the hat I wanted at the Eddie Bauer store, and I picked up a few (OK, 4!) pair of shoes at the Crocs store. Hey, they were having a terrific sale!!!

With our shopping done, we headed back to St Joe. We arrived in plenty of time to take a quick dip in the pool and make dinner to enjoy out on the deck. After dinner we made our way over to Silver Beach for yet a third night in a row of lovely sunsets. The beach was more crowded than I've ever seen it. And if I must say, it wasn't the nicest crowd either. But we were able to find a nice less-crowded area to watch the sunset and once again appreciate the beauty of Lake Michigan in the evening. 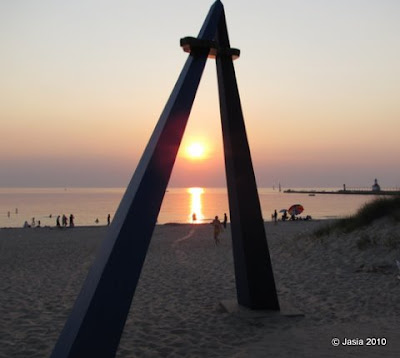 Monday
The weather forecasters said it would rain on Monday and boy did it! I watched the weather radar throughout the morning on TV hoping to catch some shots of lightning over the lake. About noon it started to look promising so we headed on down to Silver Beach. It was raining but we were prepared to shoot pics from inside the truck where we could stay dry and away from lightning bolts ;-) Unfortunately, the line of storms coming across the lake sort of lost its gusto (and lightning) by the time it got to St Joe. We didn't get any lightning shots in spite of the fact that there was a good deal of lightning over the city from a separate line of storms coming up from the south :-( We did watch a bunch of really foolish people cavorting in the lake in the middle of the storm though. 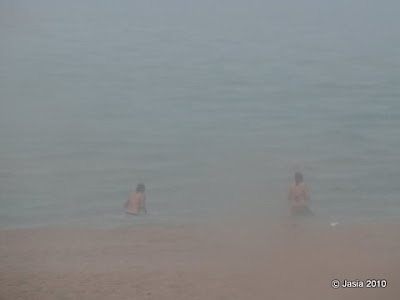 And there were plenty of others hanging out on the beach too... 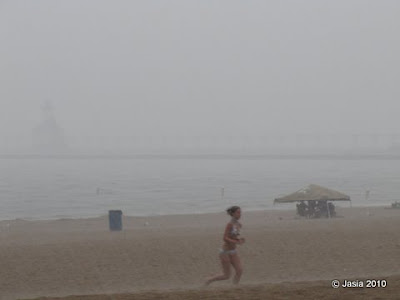 So what did we do the rest of the day? We stayed inside and bowled on our Wii game!

All in all it was a terrific Memorial Day weekend and I think we had more hot, sunny weather in one weekend than we did all last summer!

I'm sure hoping this very hot beginning of summer is a harbinger of things to come. I'd love to have a summer of hot weather to enjoy Michigan's great Southwest!
Lake Michigan Michigan City Photography Restaurants Shopping St. Joseph