December 02, 2009
What better way to enjoy the Thanksgiving weekend than to check out Christmas light displays! D and I brought DJ with us for the weekend and she enjoyed seeing them too. :-)

Friday evening (Nov. 27) we drove up to Saugatuck for their holiday lighting ceremony. I figured this would be an event similar to St. Joseph's Luminary Festival but without the luminaries. I expected to see store fronts all decorated and open late with goodies and sales to attract shoppers, sidewalks full of people chatting and making merry, and lots of festive light displays around town.

Here's what we saw: 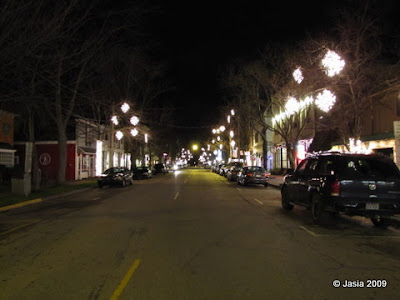 Notice anything odd? There were no people out on the streets, only a very few shops were open, and the town was quite dark. I thought perhaps I had the wrong night, but no, the marquee at the movie theater confirmed that this was the night of the lighting ceremony. 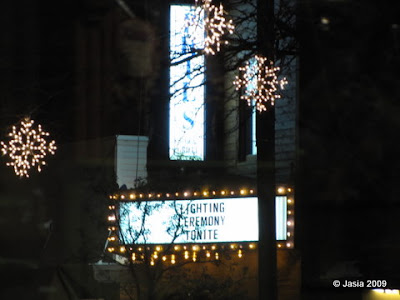 Hmmm... We didn't know what to make of it all. According to the Saugatuck.com web site, we were expecting:

So where were all the holiday festivities? We realized they were supposed to start at 5pm (although the Saugatuck/Douglas web site says 7pm), but we fully expected to still see the event going strong at 7:30pm when we got there.

We found the gentleman in charge of the horse drawn carriage rides (one of the few people out on the street) and asked him about it. He said someone told him Santa showed up at 5pm even though many people weren't expecting him until 7pm and that apparently the event is over for the evening.

We were disappointed to say the least. But since we'd already made the trip, we figured we might as well see what we could find to do there. We did find 2 shops open and strolled around them in search of a Saugatuck souvenir ornament. The first shop was an art gallery called Good Goods. It was a bit pricey, and didn't have what we were looking for. 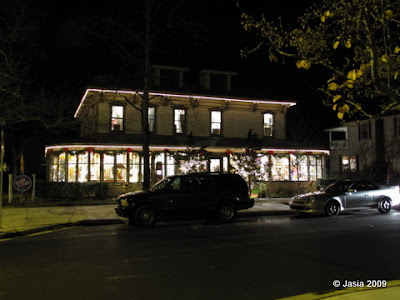 The next shop, right next door, was Cheryl's and it was a delightful place to shop! 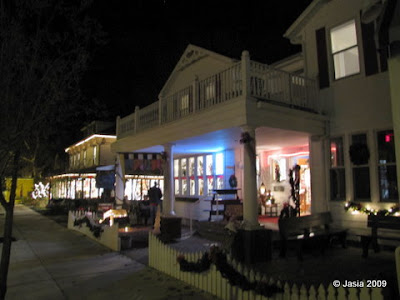 Cheryl's had all sorts of holiday decorations including the official "Sparkle Ornament" which is a collectible issued each year. It's a lovely shop with little bits of everything... jewelry, home decor, signs, art, hand crafts, and such. And as it turns out, they were having a Black Friday sale. Anything with black on it was 10% off! Well, I just love a sale and couldn't resist picking up a few things. I found fingerless gloves with a matching headband, just what I need for outdoor winter photography, an adorable snowman cookie jar (snowman has black eyes ;-) , a Wind & Willow mix (packaging has black lettering), and a thing-a-ma-bob that converts a broach into a pendant (on a black display card). 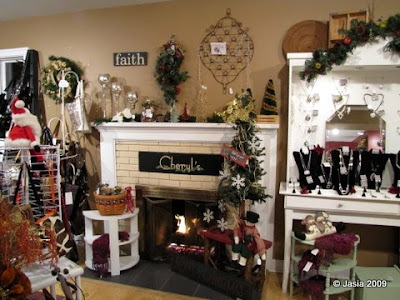 Satisfied with our shopping, we then went back to Butler Street for a carriage ride. 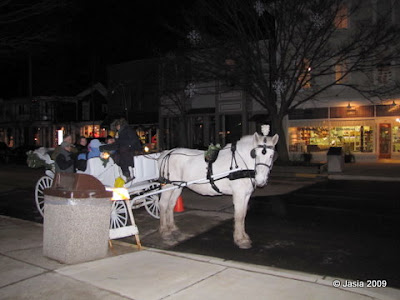 It was a lovely ride. Our driver said her business had been steady all evening but she too had expected more festivities and more people out and about.

After our carriage ride we stopped in at Kilwin's for a cup of hot chocolate. 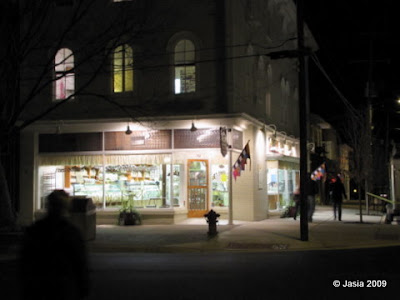 Kilwin's was transitioning from Thanksgiving to Christmas... 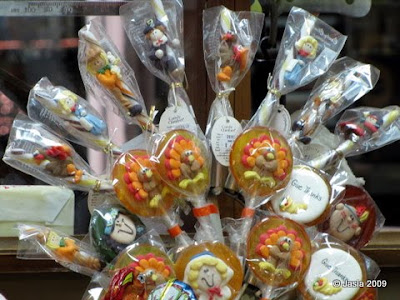 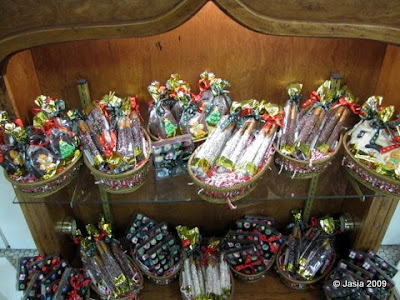 With our tummies warm and happy we made our way back to the car. We passed a shop along the way that was selling the "major award" lamp from the classic Christmas movie, A Christmas Story 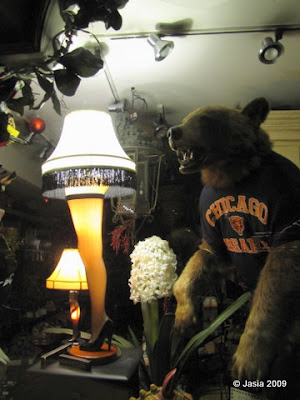 We drove over to Wick's Park to catch one last photo of the lighted gazebo and then we headed for home. 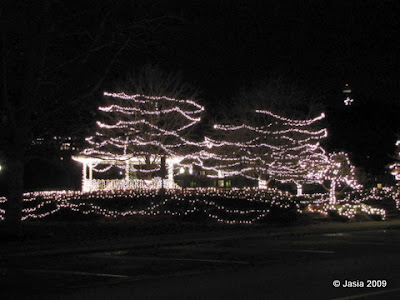 I must admit we had a very pleasant evening in Saugatuck in spite of the lack of carolers, Santa, stores open for shopping, and cheerful crowds. But I think the town could do a little better with some effort ;-)
Events Saugatuck Shopping