St. Joseph Lights Up the Bluff!

December 11, 2009
I seem to be on a roll here writing about holiday light displays. So in keeping with that theme, I'll tell you about St. Joseph's holiday lights. The downtown business area on State Street has been festively decorated for weeks now. On November 20th, the town held its annual Luminary Festival. That lit up the area even more but only for one night. You could see light displays along Lake Bluff Park since Halloween, but until recently they weren't lit.

Finally, on the evening of Dec. 4th, the city had its official lighting ceremony for the "Light Up the Bluff" displays. D and I drove over but didn't arrive in St. Joseph in time to hear the St. Joseph High School Choir singing carols as the lights were turned on. We did take a nice series of pictures later on that same evening though. I've been waiting for weeks to see this light display and we really enjoyed it. I hope you will too!

Here's the sign to welcome you to the light display on the south end of Lake Bluff Park at Lake Blvd. and Park Street. 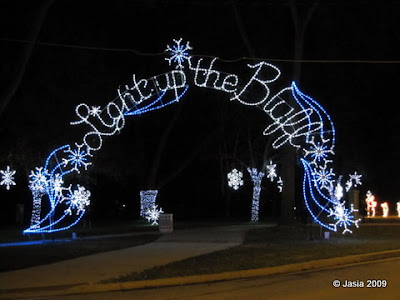 It was a cold evening, not many people out walking but lots of cars were driving by. 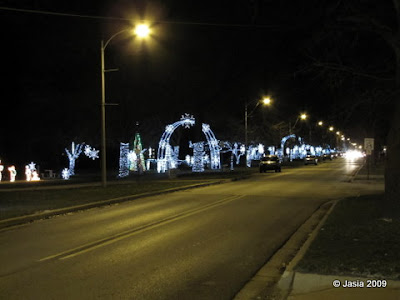 I'm not a fan of the blue/purple tinged LED lights used for most of the exhibit. I know the city is saving energy and money by using them but they don't have that warm candlelight type glow that comes with incandescent lighting. I applaud the city for being fiscally and environmentally responsible but I couldn't help but wonder how the area would look with "warmer" lighting. 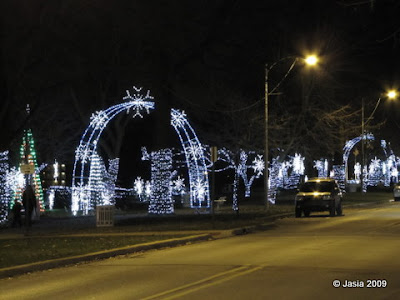 Here's a funny story for you. The two gentlemen walking in the photo below came up to talk to me. They were very friendly and engaging. We chatted about the weather (they were from California and not used to the cold) and the beautiful city of St. Joseph. And then they made their "pitch". It turns out they are missionaries for the Church of Jesus Christ of Latter Day Saints, the Mormons! I had to laugh. Of all the many, many times I've visited the Family History Library and even Salt Lake City, I've never had anyone try to recruit me into that religion. And here I was walking the bluff on a cold winter's night in Michigan and I get the pitch! I kindly explained to them that as an avid genealogist I was well aware of their religion and was not interested in hearing more. They were disappointed but took it well and moved along. 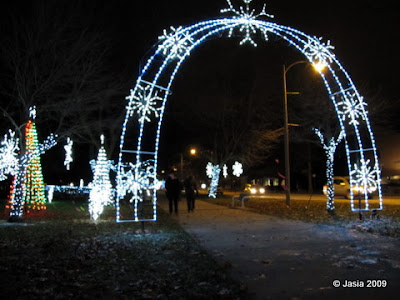 Walking through the light display was delightful. We felt like we were in a winter fantasy, a magical place... 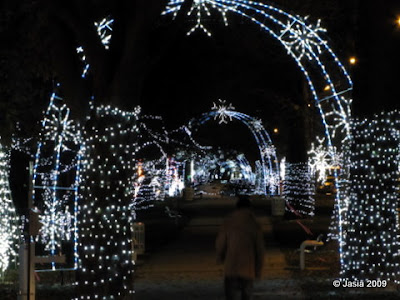 The Boulevard Inn was festively lit too. 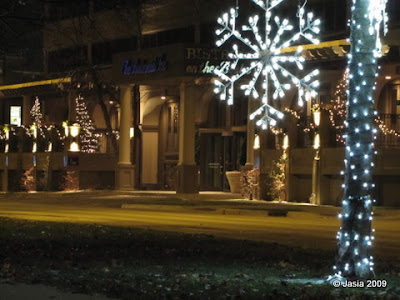 There were some colored lights in the display too. 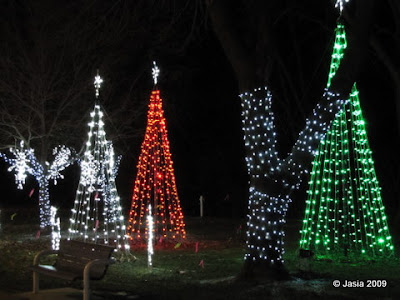 I think if you were to get down on the ground you could get a picture of these skaters looking like they were skating on Lake Michigan but it was too dark and cold to try that angle this night. 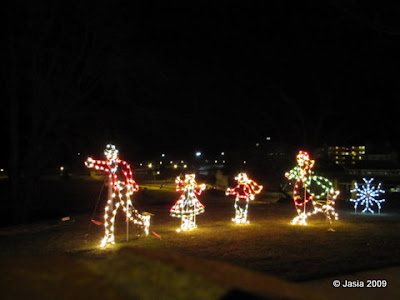 And here's ole Frost the Snowman! 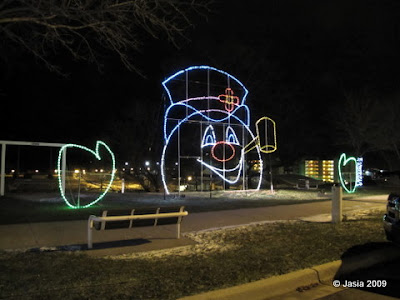 Just after we passed Frosty we got to the big Christmas tree set up on Lake Blvd. where Broad Street tees into it. It was beautifully lit and charming. 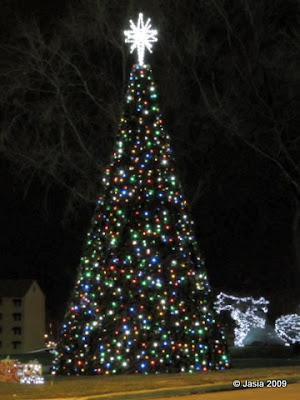 By this time we had walked half of Lake Bluff Park and we were freezing! So D and I decided to head on over to the Chocolate Cafe to get some hot chocolate and warm up. They had their usual Friday night entertainment. This time the featured artist was Ed Skjordal (and presumably a friend). 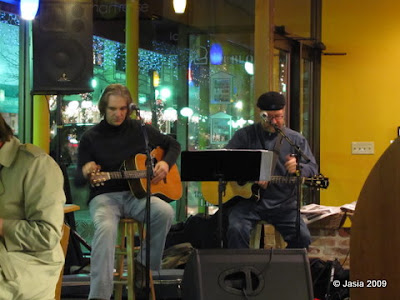 We enjoyed their music while we ate some chocolate cheesecake and sipped on hot chocolate. YUM! 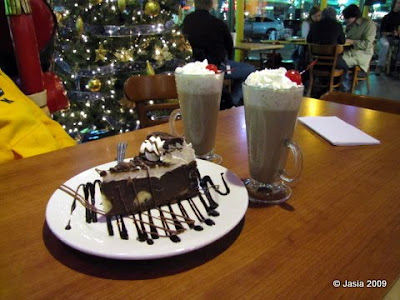 Once we were warmed up, we headed back out into the cold. This time we drove down to the flats to get some pictures of the bluff from below. The Amtrak Station and the stairs up the bluff looked really pretty. 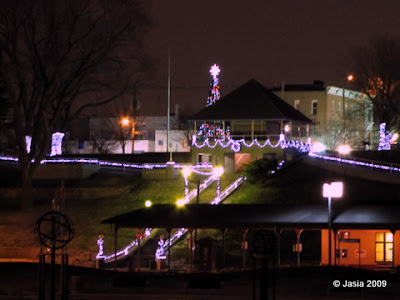 And from the corner of Lake Street and Elm Street we were able to take in most of the beautiful light display. 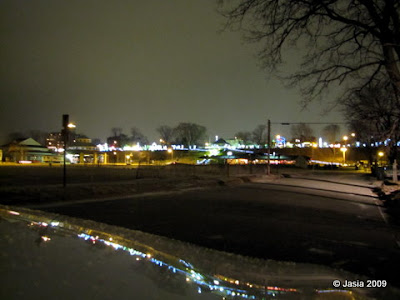 At that point, we called it a night. We were cold and it was getting late. We did walk the other half of the light display the next day, during the day. It was pretty then too. :-)
Christmas Events St. Joseph