September 11, 2009
This was my first Labor Day weekend in St Joseph. I didn't quite know what to expect. Would people be crowding the beaches for a last hurrah? Or would they be off at the outlet mall in Michigan City buying back-to-school clothes? The weather was delightful, certainly warm enough to be swimming. But the red flags were flying on Silver Beach indicating rip currents.

We had a full house at the condo on Friday. D, C, L, & Jo arrived at various times and we all gathered around the dining room table for a pizza dinner before we headed off to the beach for family pictures. There hasn't been a Lake Michigan sunset that didn't dazzle me, and I've taken lots of pictures of sunsets over the last few months. But none of them were as fun to take or as dear to my heart as the ones we took on Friday night. The kids were in a (rare) cooperative mood and the pictures reflect that. We took the first batch out on the south pier and the second batch on Silver Beach. Lots of smiles, the sun was bright enough to get good pics (with a fill flash), and we even got the unexpected element too (ultralight came flying by). The zany pictures where the kids jumped and made funny expressions were the best, but they all came out good. I'm sure my kids don't understand this, but it was the best gift they could have given me (not that it was a gift-giving occasion). We topped the photo session off with a stop at the Chocolate Cafe and headed back to the condo. We watched "I Love You, Man" on DVD and called it a night.

Saturday D cooked breakfast and then C left for home. D, L, Jo, and I headed into town to the Farmer's Market so I could pick up some more maple syrup. Now that I've tasted the real thing I find I don't care so much for the major-label pancake syrups any more. We arrived on the bluff just as the Whirlpool Compass Fountain was being turned on for the first time! 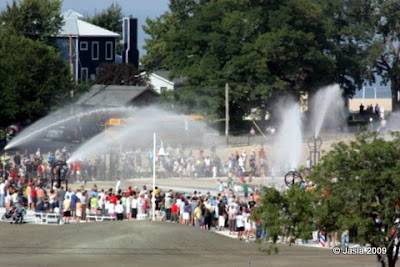 I knew this was happening Saturday morning but I'd forgotten about it. There was a big crowd down on the flats surrounding the fountain pad and when the water sprayed forth you could hear the delighted cheers from the onlookers. 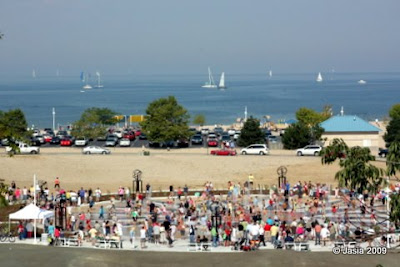 In a matter of a few seconds the kids ran into the spray with big grins on their faces. The newest fun center in town was open! 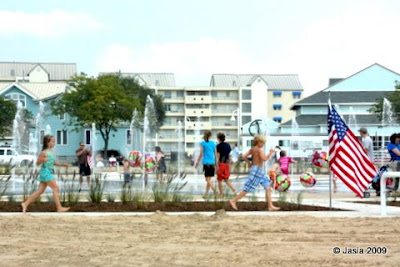 We walked along the bluff and stopped at several of the farmer's booths. I bought some syrup, peaches, nectarines, raspberries, and a luscious piece of peach pie. Yum!

Then we noticed that there were more booths than usual and a closer look revealed that it was an arts and crafts fair on the bluff. :-) I bought some glass bead earrings for my daughter and myself. 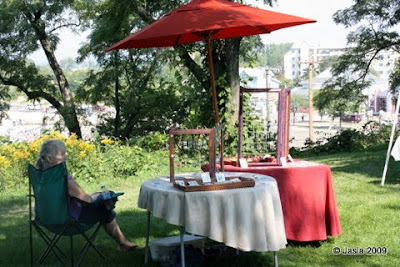 Then we found a vendor selling items with stones all around them. Quite different than anything I'd seen before. I bought a picture frame for the condo. One of the family pictures taken on the pier will go nicely in it. :-) 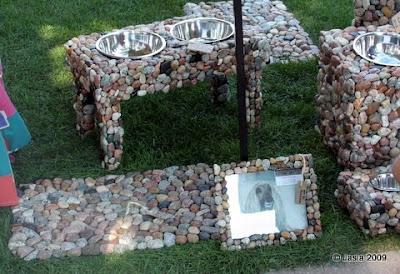 After our shopping on the bluff, we grabbed a quick lunch at the Chocolate Cafe (yes, they actually have good food there!). L and Jo wanted to go to the beach so we dropped them off there before D and I headed over to the Arboretum to check out the new boardwalk and see the sailboats in town for the Tri-State Regatta. 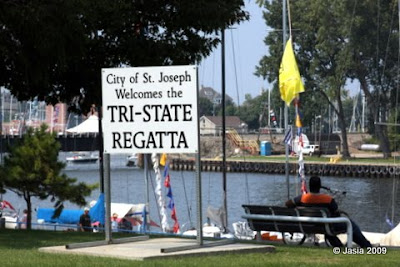 The Arboretum is a lovely place with sculptures and plantings all along it. 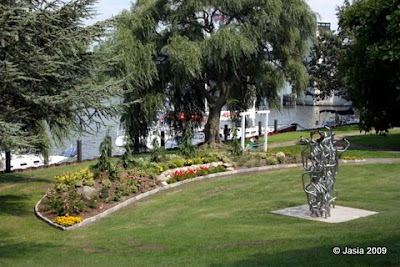 It winds it's way along the St. Joseph River from the railroad bridge to the Main Street bridge on the south side of the river. The sailboats participating in the Tri-State Regatta were moored all along the boardwalk. 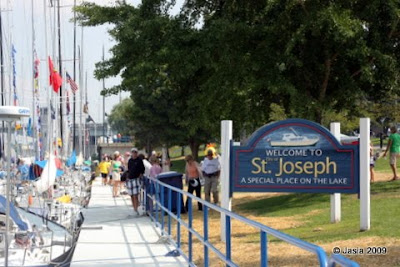 It was fun to people watch as we walked... This gentleman was happily snoozing away in his hammock. 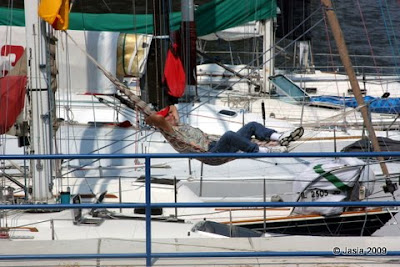 This youngster was enjoying the scenery from the bosun's chair. 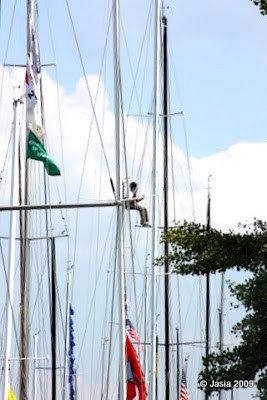 And this couple were content to just sit on a swing and take it all in. 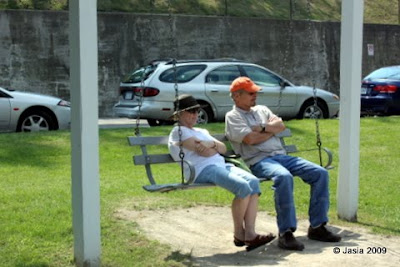 We picked up L and Jo and were back at the condo in time for the 3:30pm kick-off of the U of M vs Western Michigan Univ. football game which was broadcast on the Chicago ABC affiliate station. Yeah! It was a great game and Michigan won 31-7. Go Blue! While we watched the game, L and Jo went down to the outlet mall in Michigan City (so they went to the beach and shopping at the outlet mall, D and I did neither).

After the game was over and the shoppers returned with their finds, we all went for a late dinner at Port 412, a restaurant/bar that we hadn't been to before. It's a nice place, right on State Street in St. Joseph. It had the dark atmosphere you'd expect from a bar but none of the smoke and loud music that are customary. I suspect they have loud music at times but it wasn't being played while we were there for dinner :-) The service was very good and the food was much better than typical bar fare. Jo and I had chicken scallopini, L had a turkey burger, and D had an Asian chicken dish (can't remember the name). All were very happy with their dinners. We'll be back to Port 412! 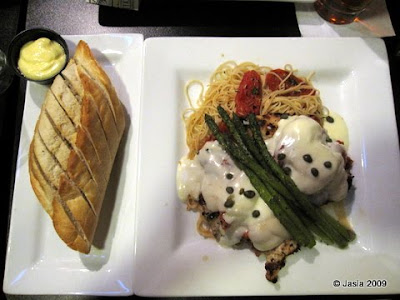 D had to call the St. Joseph River Yacht Club (sponsors of the Tri-State Regatta) to find out what time the boats would be leaving port Sunday morning. We wanted to take pictures of course. I don't know why they didn't put that information on their web site, shame on them! D was told 8:30am would be a good time to arrive on the pier to see the boats depart so that's what we planned on.

Sunday morning wasn't the sunniest of mornings and there was a marine layer of fog/haze on the lake. But we managed to get some great pictures anyway. I don't know how many boats participated in the regatta but I know it was well over a hundred. They didn't all leave port at the same time but there was a steady stream of them for well over an hour. 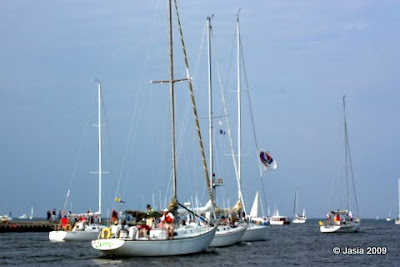 Probably the most memorable sailboat was the Michela because of the two bagpipers playing Amazing Grace as she left port. 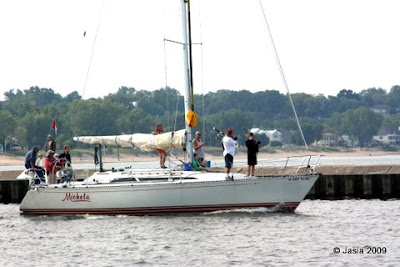 We also liked this boat because of the name ;-) 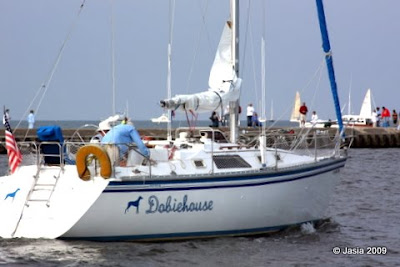 Just after we got to the pier we noticed a freighter offshore waiting for the regatta to leave so it could come into port. 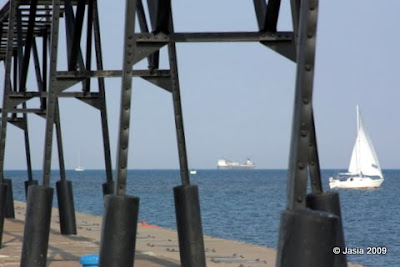 And no sooner did the last of the sailboats leave it's mooring than the freighter made it's way into port. 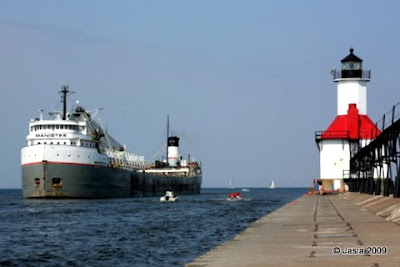 A nice bonus for picture taking!

Finally it was time to bid the sailboats adieu and head back to the condo. Soon after we had a parting breakfast with L and Jo at the IHOP (Sophia's had too long a line), which was very good! Then we said our goodbyes to L and Jo and went back into town for the first of the month "Antiques on the Bluff" sale. We weren't able to attend this antique sale every month this spring and summer but we did attend most of them. We bought something for the condo every time and this weekend was no different. We came home with two tables for the living room and a chair for one of the guest bedrooms. I wasn't sure what I'd be able to find in the way of accessories when I bought this yellow, lilac, blue, and green, quilt last spring. But look, I managed to find a lilac side table and a yellow chair. I just love this sale! 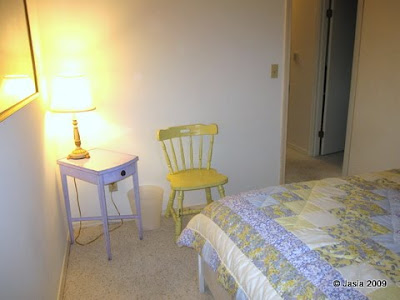 By late afternoon Sunday, when everyone had gone including the sailboats, D and I were able to sit back and reflect on what a wonderful Labor Day weekend we'd had. The weekend wasn't over, in fact Labor Day itself hadn't arrived yet. But we needed to head back to Detroit and we had lots of good memories to take with us.
Antiques Beaches Events Lake Michigan Photography Places Produce Restaurants St. Joseph