October 20, 2009
One of the things I find most enchanting about life in St. Joseph is the small town atmosphere. Having spent all my life in a "big city", I'm learning a lot about how things are viewed and treated differently in small towns. Take high school football for example. The cities I've lived in have all had no less than 3 public high schools along with at least a couple of parochial schools. You can be a star player on your high school football team and not even make the city's "top 25 players" roster. Virtually all of the people in the stands are current students (and not too many of those unless they're playing the cross town rival or it's Homecoming), parents of players, or parents of band members. The general public? No, you won't find them in the stands. Too many other choices of entertaining things to do on a Friday night.

Contrast that with a city like St. Joseph and you'll find that high school football is a much bigger deal here. D and I went to the St. Joseph vs Lakeshore football game Friday night (Oct. 16). Here are some things I noticed...Dickenson Stadium, at St. Joseph High School, is much nicer than any of the high school stadiums in the big cities where I've lived. They sell "reserve seats". How cool is that? They not only allow tailgating, they encourage it by selling tickets ($6 each) as a fundraiser. They offer reserved parking too. Tickets for the game are $5/person which gets you general admission seating (0-30 yard lines). People in the stands are for the most part very friendly and freely interact with people from "the other side". They sell a lot of spirit wear items and local politicians passed out free Mardi Gras beads in the colors of both teams. People actually sing along to the National Anthem and the school songs. For those who can't make it to the game, the game is broadcast live on a local radio station (AM 1400)! Now that is definitely cool!

A little background... St. Joseph and Stevensville Lakeshore (both class B teams) are serious rivals being neighboring communities. Both teams were 6-1 going into this game with the exact same number of play-off points (648).

So here is our "Friday night lights" experience in pictures...

We parked in the Blood Donation building's parking lot (off Cleveland Ave) which meant quite a hike across Roxy's, the length of the football field, through the parking lot and almost all the way back across the entire field to get a seat at the 30 yard line on the south end of the field. Here's the marquee we passed on the way. 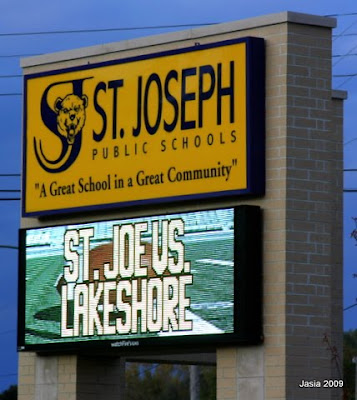 We bought ourselves a program for a dollar. Boy, what nice programs!!! 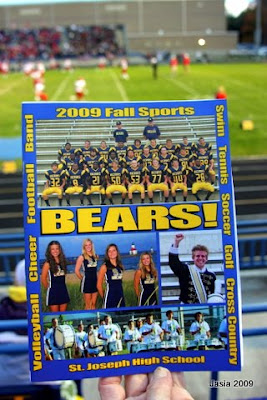 Here's the entrance to the stadium and the press box at the 50 yard line. 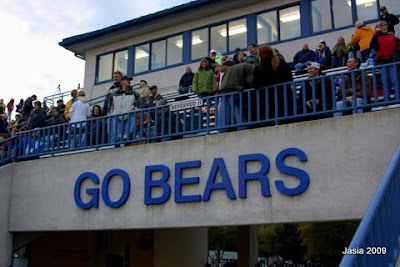 It was overcast and the lights were on even as the teams warmed up. We arrived about 45 minutes before kickoff so we were very happy to see the band finally take the field to get things started. 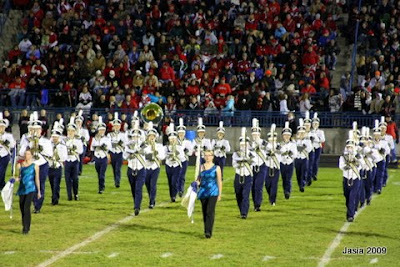 And then the cheerleaders got the crowd worked up... 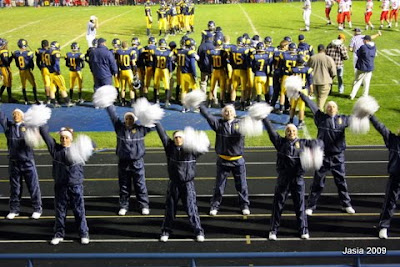 After "the grand entrance" of the team and much fanfare, the game finally got under way. The Bears were looking good but there were quite a few mistakes that led to penalties. 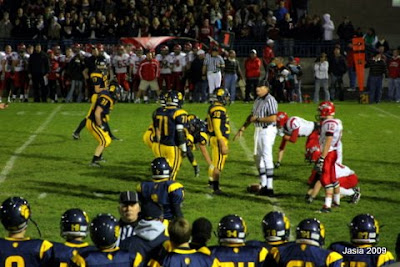 Still, the Bears played well through the first half scoring 4 touchdowns! Here's one of them... 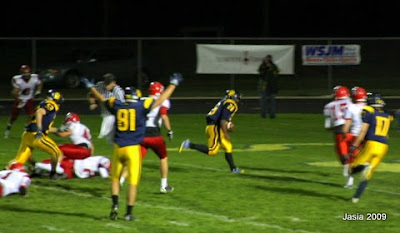 And here was the touchdown shown on the scoreboard. 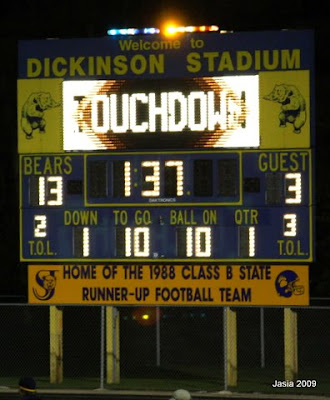 And here's the Bear's mascot parading up and down the field celebrating the touchdown. 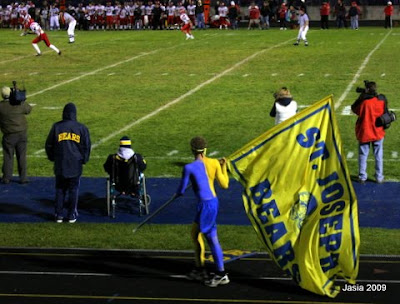 It was an exciting first half and we were having a really fun time until the rain started. Then it was a little less fun ;-) 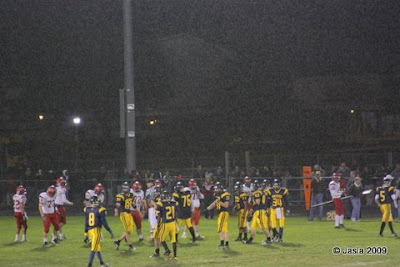 So we decided to leave at half time and listen to what would obviously be a Bear's victory on the radio in the comfort of our condo. The score at the half was Bears 28, Lakeshore 10.

But wait! That's not the end of the story. We got home and settled in with mugs of hot cider and a nice thick slice of that pumpkin roll we'd picked up earlier. We turned the radio on and much to our surprise, it sounded like an entirely different game were listening to. The Lakeshore Lancers had scored and definitely had control of the game. And then they scored again. And again. Where was all that talent and effort we'd seen from the Bears earlier? I guess they didn't want to be there in the rain either ;-) When the game ended, the Lancers had won with a score of 39-28. Congratulations to them for a game well played and their victory!
Events St. Joseph