October 18, 2009
There is no better place to celebrate Sweetest Day than in southwest Michigan. Take it from me, I'm there and I've got the sweets to prove it!

D and I came up Friday to meet with the furnace repairman. Bad news. The condo's furnace is not repairable. That means a new furnace for us. But not this weekend. The installation will have to be scheduled in another week or two. In order to spend time at the condo this weekend we had to make a trip to Lowes to buy a couple of space heaters. Hey, it beats being cold!

By the time the repairman left it was lunchtime. So we headed into town to have lunch at Chan's Garden. What? I haven't told you about Chan's before? OK, here's the scoop. My friend CH (who lives here in St. Joe) introduced me to Chan's a few months back. It's a Chinese restaurant in downtown St. Joseph, on State St. 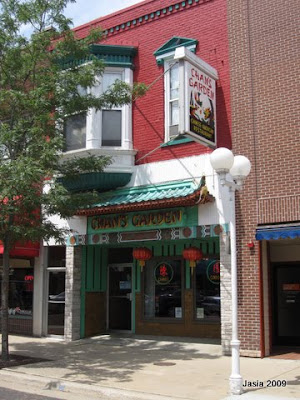 They have really good food and their lunch combo prices can't be beat. 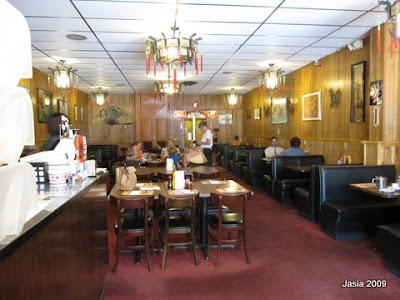 D had chicken with broccoli. 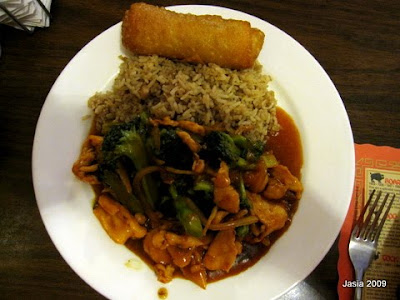 My favorite is sweet and sour chicken, and it comes with fried rice, an egg roll, and your choice of egg drop soup or hot tea... all for $5. :-) 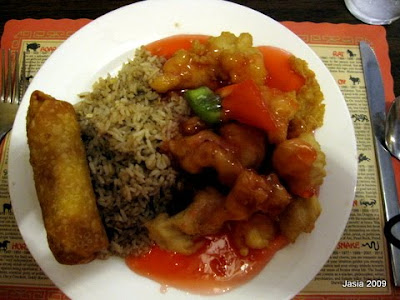 After lunch it was time for errands. First stop was Season Pass, a sport memorabilia and spirit wear store on Red Arrow Hwy. Nice selection, no great bargains. Of course we had to pick up a few U of M items while we were there ;-) Next stop, Lowes, for space heaters. Two to-go please! On the way home we stopped at Halloween USA to pick up costumes for D and I (we're goin' to a party next weekend). Then we made one more stop at Nyes Apple Barn.

We stopped in Nyes once before, in the late spring (to buy strawberries), but weren't very impressed. But it's apple season now and we were hoping they might have the (relatively) new variety, Honey Crisp, that we've been hearing so much about. 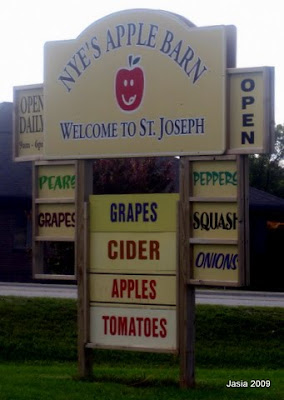 We were in luck! They had loads of Honey Crisp apples :-) 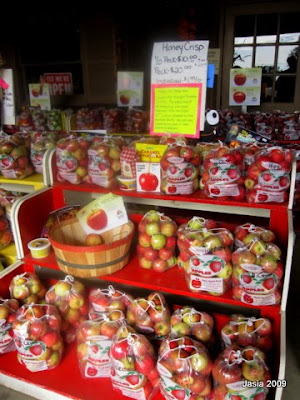 They weren't cheap though. A half peck of the Jon-Macs was $4 but a half peck of Honey Crisps was $10! Yikes! We bought them anyway. How else would we learn what they taste like? And the answer is... they taste sweet like a Delicious but with the crispy crunch of a Granny Smith. I like them but I prefer a more tart apple. These won't go to waste but I won't be paying that premium price for any more Honey Crisps. 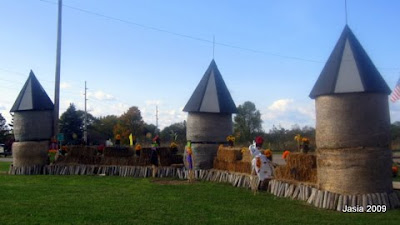 We picked up a quart of fresh apple cider (Grandpa's brand made in Coloma) while we were there and looked around for doughnuts. Hmmm. No doughnuts. Can you believe it? Who sells cider without doughnuts? Evidently Nyes does. 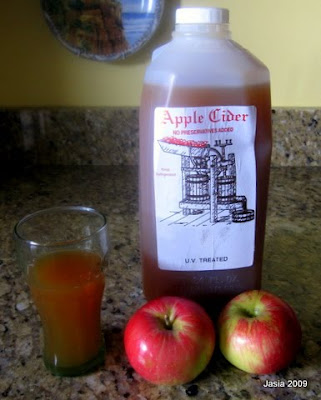 So. No doughnuts. That meant we had to stop at Martin's to pick up something sweet to go with our doughnuts. I was looking over the doughnut selection when D called my attention to the baked goods in the refrigerated section. Oooooh! Looky what we found... Pumpkin rolls with cream cheese filling! That made the choice easy. A pumpkin roll would go great with cider! :-)

Back to the condo to unload all our goodies and plug in the space heaters. We'd been talking about what to do after dinner and I came up with the idea of a Friday night high school football game (no surprise there, eh?). I fired up the laptop and to my surprise and delight I discovered that St. Joseph High School was playing Lakeshore High School (their biggest rival) at home. Both teams had a 6-1 record for the season. Oh boy! Great game in the making!!!

By then it was time for dinner. We decided on Clementines and it was a great choice. They had the place all decorated for Halloween. 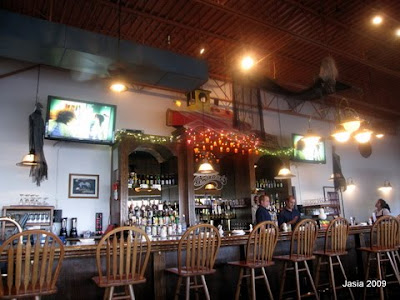 I had the Red Rooster (grilled chicken with fresh strawberries and strawberry sauce) and D had prime rib. Both were just superb. Dessert? Why of course! It is Sweetest Day weekend after all :-) We shared a hot apple dumpling with a huge scoop of vanilla ice cream. Oh my, my, my. A hot, sweet, tender apple, with cinnamon sauce, baked in a crispy, flaky dough and ice cold cream... hot and cold and oh so sweet! YUM to the extreme!!! 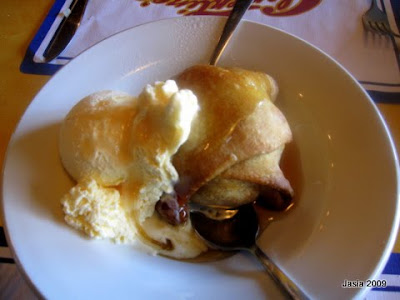 After dinner we headed back to the condo to grab some blankets, cameras, and warm clothes. Next stop, the big game! [To Be Continued]
Home Improvements Restaurants Shopping St. Joseph