June 10, 2009
Last Saturday, June 6th, was the first Farmers Market of the season in St. Joseph. I've personally not been to many farmers markets, in fact, the only farmers market I recall shopping at is the Eastern Market in Detroit. That is one huge market that has plants and produce from all around the country and the world. There's some locally grown produce there as well but it isn't promoted as a locally grown market. The Farmers Market in St. Joseph, however, is promoted as one featuring only locally grown produce :-)

The Farmers Market is held on Saturdays from June 6 - October 10th (except for July 18th which is the weekend of the Venetian Festival), 9am-2pm. Located at Lake Bluff Park and Broad Street in downtown St. Joseph, it has beautiful Lake Michigan for a scenic backdrop. Ya can't find that in a grocery store!

D and I got to the Farmers Market about 11am. The weather was sunny but cool, perfect for a stroll on the bluff. I must admit that I was a bit disappointed when I saw how few vendors there were (6-8) but then I remembered that it's still very early in the growing season. I'm sure there will be more as more produce gets ready for picking.

Since this is the beginning of strawberry season here in Michigan we were hoping to pick up some fresh-from-the-vine strawberries. But we soon found out we were too late! Evidently only one vendor was selling strawberries and they had already sold out. That's what we get for not arriving sooner :-7

Our first stop was at a merchant selling honey and maple syrup. I was immediately taken with the variety of cute bottles of syrup. My eye found a bottle in the shape of a violin right away and I just had to have it. And then there was the bottle with the St. Joseph lighthouse etched into it... well I just had to have that too, along with a "bear" of honey. (That's Lake Michigan in the distance.) 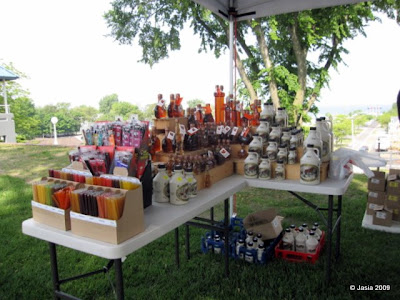 I forgot to take closeup shots of the syrup bottles but you can get the idea from this one. 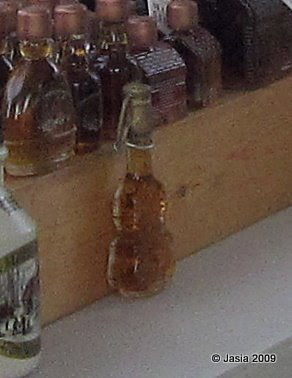 Then we walked on down and found this vendor selling plants. I'm not in the market for any plants right now so we didn't linger there. 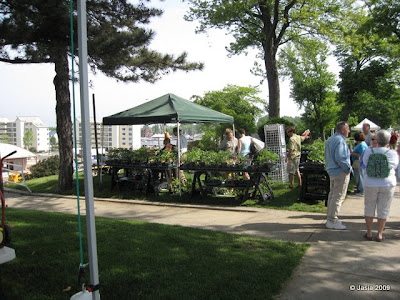 We found a couple different vendors selling baked goods. One featured home made breads and this one featured pies, cookies, and big cinnamon buns with thick icing... the stuff we used to call "gook". 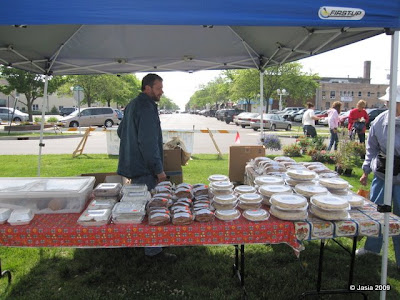 D picked out a mixed berry pie and it was delicious!

The last vendor we stopped at was a sweet little old couple selling kitchen towels. These are the kind that are crocheted on top so you can hang them from your oven or cabinet hardware. They were just darling, the couple and the towels! We chatted for a bit and I bought 3 towels (gotta help support Michigan's economy ;-) . 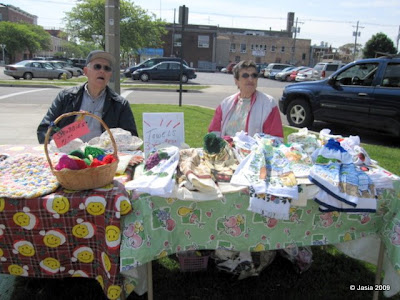 We turned around to see if we'd covered all the vendors and what did we see? A sailing regatta out on The Lake! 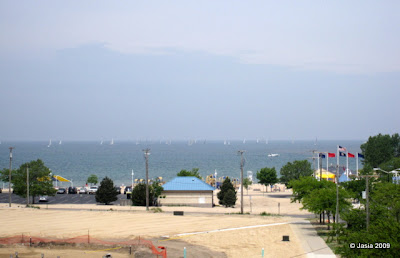 It was a wonderful morning spent at the Farmers Market and I look forward to shopping there throughout the summer and fall as Michigan's bountiful harvest becomes available.
Shopping St. Joseph