Synopsis of Our Weekend

June 08, 2009
Well, so much for my idea of blogging more on the weekends. I can see now that I'm not likely to be doing much of that in the near future. I gave in and got DSL service at the condo but didn't get around to writing even one blog post. Here's a synopsis of my weekend, details to come later in the week.

We arrived late Thursday evening, too late to do anything but read a couple chapters of Hot Six (Stephanie Plum, No. 6)

by Janet Evanovich. (I re-read all of Janet's Stephanie Plum series each year before her new novel comes out in late June.)

Friday morning D and I grabbed a couple of breakfast sandwiches from Burger King and headed over to one of the two scenic outlooks on Lakeshore Drive south of downtown St. Joseph. We thoroughly enjoy breakfast by The Lake! (see photo below) Then we headed into town and bought our annual parking passes for Silver Beach and Tiscornia Beach. Back to the condo by 10am to meet with the window/glass repairman. He'll be replacing 3 of our windows hopefully sometime in the not too distant future. 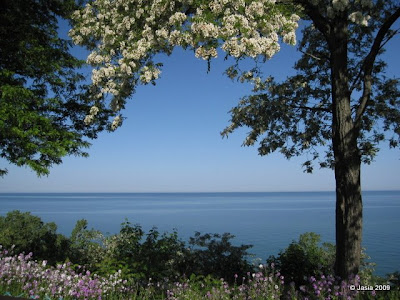 I spent the rest of the morning planting flowers on the back deck while D installed the DSL. The maintenance crew has finished installing the new deck railing and it looks very nice. Then we were off to lunch at the Broad Street Cafe in St. Joseph and a bit of shopping at a couple of my favorite stores, G&M Variety and Edgewater Gifts. The weather was just lovely, blues skies, sunshine, and temp of 75F. Sounded like a good time for our first trip to lay out at the beach... so that's what we did next :-) (see Silver Beach below) We only had about 45 minutes of sun time before we had to head back to the condo to meet with the electrician at 4pm about running a line for the microwave oven... 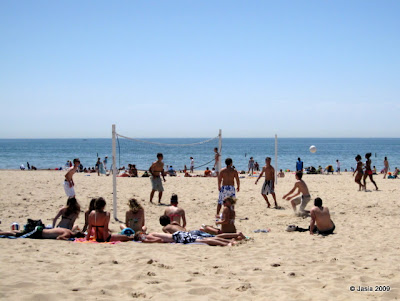 Dinner time! We headed into town to dine at Schu's on the The Lake, then we went over to the band shell on the St. Joseph river to catch a free concert by Keith Scott, a Chicago blues singer and guitarist. Wonderful! The concert ended just before sunset. We ran back to the condo (it's so great to live so close!) and grabbed K and our cameras and brought them back to Lake Bluff Park with us for a stroll and some fantastic sunset shots. 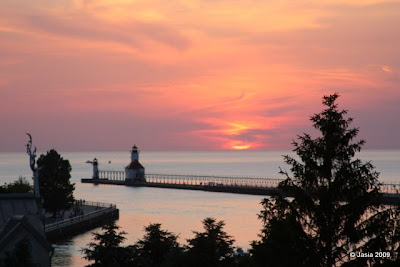 After the sun went down we made a quick stop at Cabanas for an ice cream sundae and then called it a night. Whew! And that was only Friday!

Saturday we had breakfast at Schu's (they've just started serving breakfast so we thought we'd check it out) and then walked down Lake Bluff Park to the Farmer's Market. It wasn't too impressive but it's the first of the season and I expect there will be more vendors in the weeks to come. Did a little more shopping in downtown St. Joseph at Eve's and Moxie's and then had to get back to the condo by 1pm to let the electrician in to work on the electrical line. I was going to take in a creative writing workshop at the St. Joseph public library but then I discovered it was focusing on poetry and short stories so I opted to clean up the deck a bit and hang a few art pieces at the condo.

Our Realtor, Jan Richards of Attila Real Estate, who helped us find our condo, came over to see the progress we've made so far on our redo. She was very complimentary and enthusiastic which made us feel very good. She's one of the few people who knew what it looked like "before". Then she left and we got dressed for dinner. We met JR and some new friends at Clementine's on the St. Joseph river. Had a great time and were home by 8pm to catch the Red Wings playoff game. We enjoyed a bottle of wine (red of course!) from our visit to Karma Vista while we cheered the team on. Yeah Wings! They won over Pittsburgh making the series 3-2 in favor of the Wings. :-)

Sunday morning we had a leisurely breakfast at Sohia's in Benton Harbor and then drove over to Lake Bluff Park for the monthly Antiques on the Bluff. We spent a good couple hours strolling by all the vendors, bought a few things, and then headed back to the condo. D threw a couple hot dogs on the grill (I'll bet you were wondering if we ever cook at home, LOL!) and then we spent the afternoon hanging more artwork. By dinner time we packed up and headed on back to Detroit.

It was a wonderful weekend but didn't allow me any time for blogging. :-( Maybe on a rainy day... stop right there! There will be no rainy weekends this summer! Summer is too short as it is. We want only hot, sunny days through September! Oh OK, it can rain over night so the farmers will have bountiful crops ;-)

I'll be wrting more about some of the places and events I've mentioned here in future posts. Stay tuned for the details!
Antiques Home Improvements St. Joseph