Fourth of July Fireworks and Concert in St Joseph, MI

July 06, 2009
We celebrated our first 4th of July in St Joseph this past weekend. The weather was not the best for sunning on the beach that's for sure. As has been the case most of this spring and summer in Michigan, the weather was cool and damp. Fortunately, most of the businesses in town were open. The downtown streets were crowded with people shopping, dining, and just hanging out. This was a good thing for the local economy!

We bought tickets for the Southwest Michigan Symphony Orchestra concert at the Shadowland Pavilion the evening of the 4th. Tickets were available at various places around town. We got ours at Martin's grocery store on Cleveland Ave. The price was $20 per person in advance or $25 the day of the concert. We bought 4 tickets because L and Jo joined D and I to celebrate the day. We weren't sure what we were getting for the price of admission. The tickets only indicated "general admission" and that the gates opened at 6pm and the concert started at 9pm.

I called the folks at St Joe Today but they were no help. Since it wasn't their event they had no information to give me. What I wanted to know was if seating was provided or if we had to bring our own, would there be dinner-type food available for sale, how early we needed to get there, and was there reserved parking for concert goers. They did advise me that the SMSO's offices were closed on Saturday and gave me their web site address.

I checked the SMSO web site but still couldn't find the answers to my questions. :-(

We decided that we'd better lug our chairs and blankets with us along with some drinks. And we hoped that Schu's on the Beach would be open so we could at least buy some burgers and fries. We left the condo shortly after 7pm.

We already have a parking pass for Silver Beach so we didn't have to pay for parking. The lots looked to be full but driving up and down the rows we managed to be in the right place at the right time just as someone was pulling out. :-) Our walk to the concert grounds was short but we were still glad we had taken a piece of luggage on wheels to carry our cameras, drinks, bug spray, blanket, and chairs. As it turns out, we needed everything we brought. Seating is not provided. The $20 admission just got you into the concert area but nothing more.

We each brought a sweater or sweatshirt and we were very glad we did. The temperature was cool (in the 60s) and got even cooler after the sun went down. We got there early enough to be able to sit just about anywhere we wanted. The problem was, we didn't know where to sit to get the best shots of the fireworks. The place we chose wasn't the best for taking pictures but it was fine for watching the fireworks and listening to the concert. 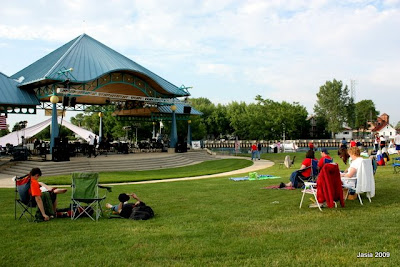 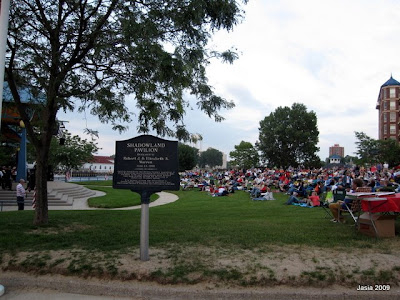 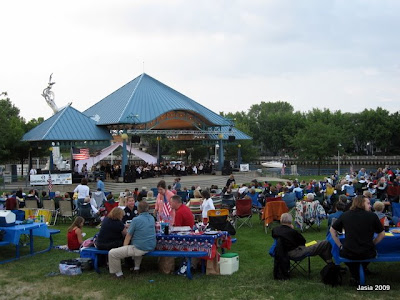 I stayed with our stuff while D, L, & Jo went in search of food. They took a quick look around the concert area and discovered that the only things for sale were beer and wine, popcorn and candy (Skittles, M&Ms, etc). Fortunately, we'd gotten our hands stamped coming in so re-entry wasn't a problem. Schu's on the Beach was a mad house but the crew managed to come back with burgers, fries, drinks, and peanut butter cookies for all. 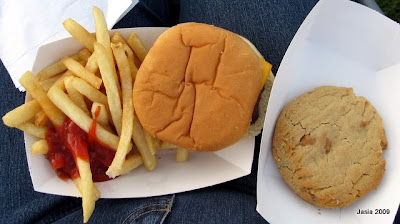 After our little dinner, we took a walk to the public bathrooms on the beach. As could have been predicted, there was a long line for the ladies room. There were additional porta-potties available in the parking lot but it didn't look like they were getting much use. 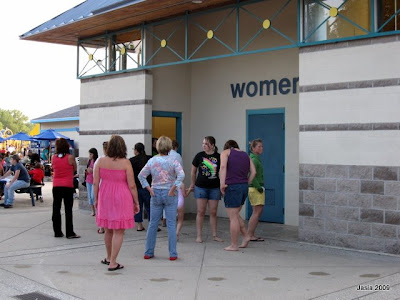 On the way back we checked out the beach and the boats on the lake positioned for viewing the fireworks. 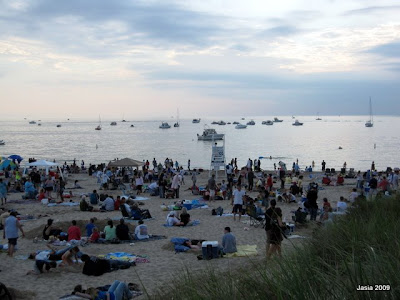 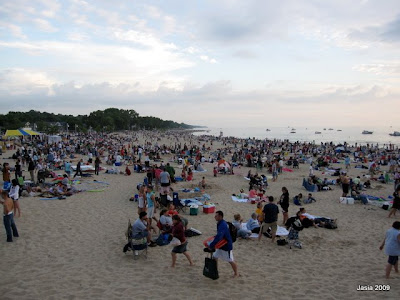 Then we stopped to talk with a gentleman carving a carousel horse for the new Silver Beach Carousel. He said it takes him about 3 weeks to carve and paint one horse. 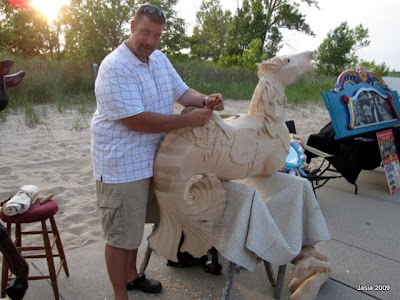 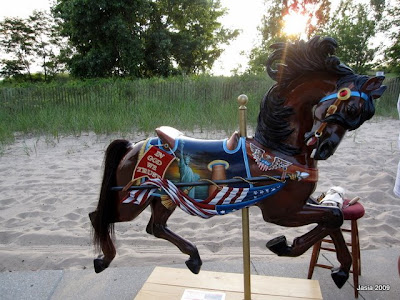 Then we stopped to say hello to a couple of disc jockeys from a local radio station. 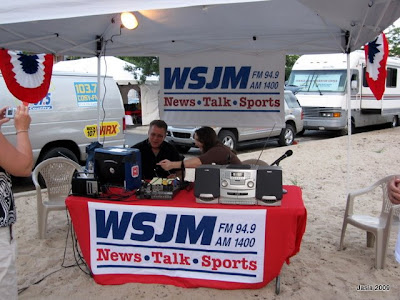 And then finally it was time to return to our seats. We could hear the musicians warming up... 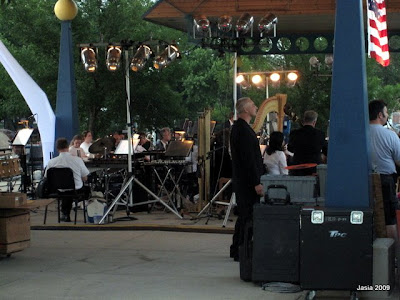 The concert was delightful. The music was a lovely collection of American tunes along with a couple other selections. Stephen Foster, Scott Joplin, Gershwin, Rogers and Hammerstein, John Phillips Sousa and even the Beach Boys were featured. Just what an Independence Day celebration by the lake called for! The Symphony also threw in some Latin selections that none of us recognized and quite honestly we could have done without. But when the orchestra started playing the 1812 Overture we knew the fireworks would begin in just moments. 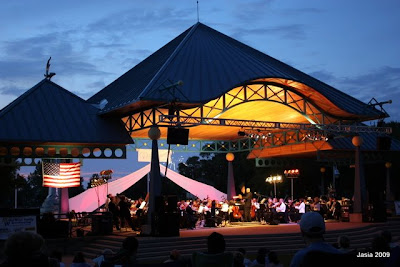 I've been to my share of Fourth of July concerts. For several years in a row D and I took the kids and their friends to the Independence Day concerts at Greenfield Village in Dearborn, Michigan. The music there was provided by the Detroit Symphony Orchestra. Those concerts were wonderful as well. The only thing they had going for them that we missed at the St Joseph concert was the cannons. At Greenfield Village they shoot off actual cannons at the appropriate points in the 1812 Overture. It's really quite exciting. But hey, not everyone has cannons and the SMSO got along just fine without them. The fireworks started up and the ooohs and aaaahs began! 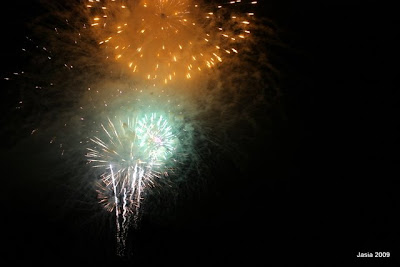 The fireworks show was awesome, not as big as some I've seen but quite a site none the less. We got some nice photos of the fireworks but without any contextual elements they look just like fireworks you might have seen at any show across the country. We'll have to work to better position ourselves the next time around. 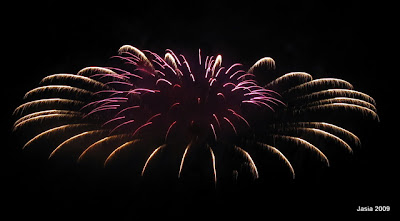 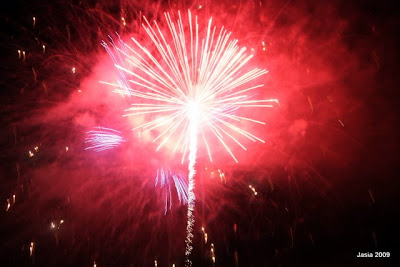 Once the concert and fireworks display was over we made our way to the car as quickly as possible. Of course everyone else had the same idea. Even though we live just 3 miles from Silver Beach, it took us over an hour to get home. Forty-five minutes of that was spent trying to get out of the parking lot. We'll have to work on getting a better position for parking next time around too ;-)

All in all, we thoroughly enjoyed the Fourth of July concert at the Shadowland Pavilion on Silver Beach. To those who might be considering attending the concert in the future I would say this: dress warm, bring food & drink, bring something to sit on, the first fireworks you see behind the stage are not the real show but merely amateurs having fun, the mosquitoes are tenacious, parking nearby is difficult to find and even more difficult to leave. But, THE CONCERT AND FIREWORKS SHOW ARE WORTH THE INCONVENIENCES YOU HAVE TO PUT UP WITH! ENJOY!
Events St. Joseph