July 27, 2009
Most people tend to think of St. Joseph as a beach town, resort town, art town, or the county seat for Berrien County. But St. Joseph is also a port town. D and DJ and I got to witness that first hand this past weekend.

After a nice breakfast at Sophia's Friday morning, we stopped at Lookout Park to gaze upon the lake for a bit. Immediately off the coast was a freighter heading north. We watched it for a few minutes debating if it might be coming into port in the St. Joseph River. 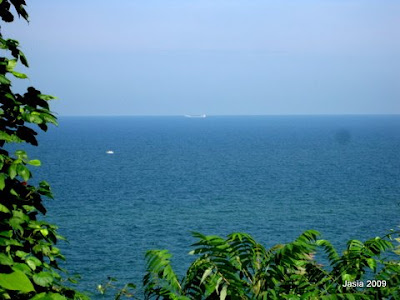 We decided to run back to the condo to get our cameras (our DSLs, not the point-and-shoot I took the previous pic with) and head into town to see for ourselves.

Sure enough, just as we arrived at the top of the bluff in front of the Whitcomb we could see the ship coming down the channel of the river between the north and south piers. The channel never looked so small until a freighter occupied it! 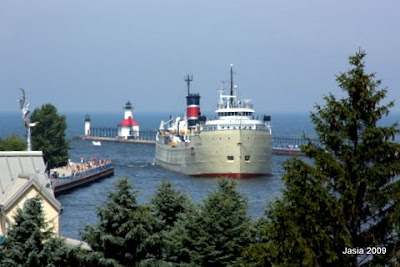 We watched it progress through the railroad bridge... 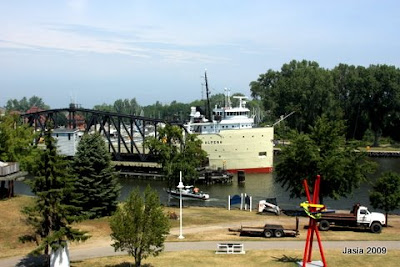 And waved back to the crew members who waved to us! The Alpena typically carries a crew of 21 and sails under the Inland Lakes Management banner carrying cement products between Lafarge facilities along all 5 of the Great Lakes. 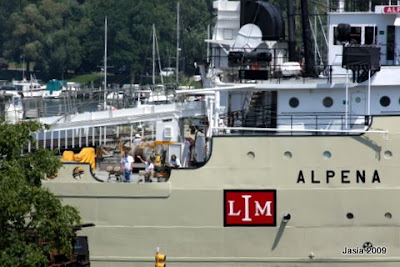 In just a matter of minutes the rear of the ship was passing through by the bridge... 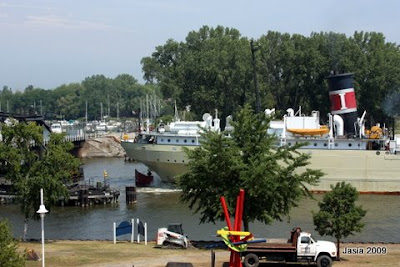 Before we knew it, the freighter was pulling up to the dock to load up. 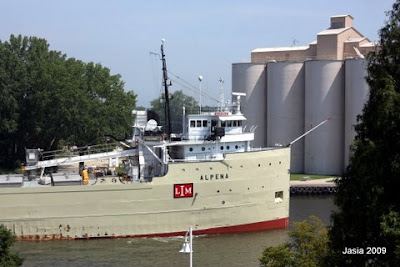 I've watched freighters come and go along the Great Lakes and connecting waterways all of my life. But until I came to St. Joseph I'd never seen one come into port and pull up to a dock, up close and personal. I imagine it would be akin to threading a needle when you're floating on raft... the skill required must be substantial!

I'm not sure how long the Alpena was in port. It was still at the dock when we drove by on our way to South Haven on Saturday but it was gone by the time we went to the concert in the bandshell Sunday afternoon. I would have liked to have seen the Alpena put out of port. I'm sure I would have been amazed by that too!

Does anyone know if there is a publically available listing of freighters coming and going from the port of St. Joseph?
Activities Lake Michigan St. Joseph